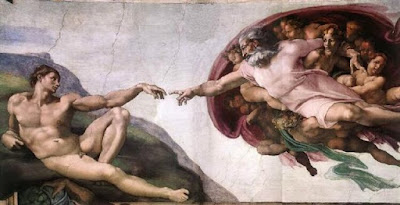 Michelangelo's painting in the Sistene Chapel. The story of creation and God reaching out to touch Adam.
Went to the morning service yesterday with an open heart, ready to hear if God had something to say to me via church. The Pastor challenged us to do a kindness for someone we struggle to love. Now that is a challenge. I can think of lots of people who deserve something but to make an effort for someone who annoys me, frustrates me, and probably doesn't even like me ... well! So far there are five people on my list. People I would rather kick than bless actually. I do have this theory though. There are approx six billion people in the world. So I can afford maybe 100 people to hate my guts. That's still a pretty good average. And every time I meet one of these people I think to myself "join the queue, it goes around the corner" and they become one of my hundred. It's how I keep the 'people pleaser' in me quiet. Funny that most people don't matter, but there are those significant ones who matter. The ones we desparately want approval from. Even if they are impossible to please! It could be a parent, a leader, a older sibling, the boss, the silly tart at work who holds all the power. I have a friend who has this situation with his older brother. No matter what he does, his older brother criticizes him and he never feels respected. And he says "It shouldn't matter, but it does." I used to feel like this with my mum. Now we can get annoyed with each other but always roll back to a 'good' place. Oh the angst of my teenage and early adult years as I both feared her and sought her approval. Anyway, I expect there are a few 'blessings' winging there way to me this week because I know well enough that I have annoyed the odd person over the years as well. I'm sure to be standing in other folks queues as well. We'll see. But go on, do something for someone you normally wouldn't. It might change their life but more importantly, it's good exercise for our hearts. I reckon it's what God wants, for us to touch one anothers lives in meaningful ways. Keeps us humble and soft.
Posted by Ahipara Girl at 10:50 AM