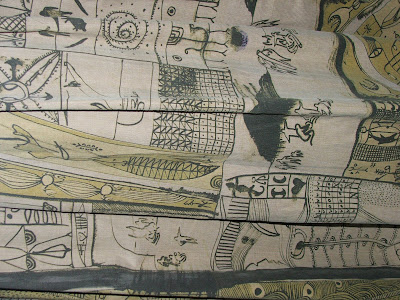 I am obsessed somewhat with cloth. Not just any cloth. I don't like those fabric shops at all. Sometimes I'm sucked in. But when I get home, I think "what the hell was I thinking?!". Sorry fabricaholics. But cloth that tells a story .... well, that's something else.

Barkcloth from the Pacific Islands, handworked, beaten from nothing into something. Colour extracted from other plants. Cloth then overdyed, marks made by primitive means. Symbols instantly recognised by locals, mystic to aliens. Currency when women had none. Power in man-governed societies.

I want to make cloth that speaks. For now I make gobbledy-goop but one day, I will have conversation swirling on desirous cloths too. Cloths that I covet.

One day I will have my own distinctive 'thing' because let's face it, we all want our own 'thing' don't we? That point of difference (I'm feelin' ya Kylie-babe). For now I am thankful to be on my journey. I got the 'flow' happening. Haha, 'flow', that's loaded isn't it. I'm talking creatively people. After a rather dry spell in that 'inner place', somethings' astir. I can't stop 'moodling' about cloth. Keri Smith's book "How to be an explorer of the World - Portable Life Museum" tempts me over there on the coffee-less table.

Rich has kindly tipped my crafting corner out for me at my request to motivate me to create a more conducive creative space. It covers two couches, considerable floor space and doesn't tempt me in the least to sort it out. How the heck did I get so much stuff in to such a small space. I once had a studio space and two sons. Now I have three sons and no studio space. I have so many dilemnas all at once. None of them urgent, but nonetheless (i always trip over words that are stuck together like that - like 'useless, diehard, hammerhead, sometimes', it's lucky I don't use them often), in-deed, nonetheless I .... forgot what I was gonna say, oh yes, the jumbled up room I am sitting in and ignoring.

And yet here I am on my computer talking to you. Checking my Facebook page. And writing, cause I love to write too. I love words. Words are my friends. They work for me and sometimes against me, but I love feeling words swirl and buzz around me.

Tomorrow is crafting day at my house. Last night was crafting at the local cafe on the beach with a bunch of friends, new and old. All I do is think about playing. It is playing. Sometimes it's artful and other times it's just plain old making. And I love both as long as there is that element of play. Purposeful and purposeless. It's all about having fun and is very satisfying.

I've knitted up a bunch of hats. I'm ready to move on to crochet cause I want a big round-top fluffy hat for me. And I'm aching to stitch a new dress from old cloth. And some old pants remade new. And some more artful spaces around the house. And time with creative souls (Imbi lands next week, Cleo and crafty clever peoples tomorrow, and surfing my fave blog haunts, and myself always). And time with spiritual buddies. And hugs with babies, mine and collected ones. And a ponderous walk along the beach, eye's-down of course! And probably vacuum the floor just for shock factor. And clean the toilet. Ok, let's not get carried away.

I have a new visual diary (sans India again) and somewhere buried in the garage is my little watercolour paints sets from days when I thought I would learn to paint at art school. ha! So now I will play. Purely for me. To see what can be born. And destroyed. And born again.

I opened the curtains this morning to see big sky in my lounge and suddenly realised just how beautiful the sky is, and how it's always there, and it's so big, and always moving and changing (ok so shut up scientific brains out there, i realise it isn't actually 'there', grrrr), and it's like a serious locating device in my life that I seek wherever I am. Like the ground, 'grounds' me, I also read the sky for things. And the seaside calms me.

I dare you tomorrow to stop and really look at the sky. Isn't it beautiful. Like a big beautiful coloured blanket God spread around the world. O my. That's right. It's right there. Someone once told me to stop, lie on the ground and look at the sky. So I do. Regularly. Cause there's something healing about it all. Lying on the ground, being still, feeling the breeze on one's face, and just gazing at big beautiful sky. It's free, it's accessible, it's there. I MAKE my kids do it. Doing nothing well is an artform in itself.

I was trying to imagine what the world would be like with no sky. Imagine if you opened the curtains tomorrow and the sky was gone. I think I would die. I was blown away at how much I take the sky for granted. Shame I have neighbours, otherwise I would rid myself of curtains so i could see outside all the time.

He Wishes for the Cloths of Heaven
Had I the heavens' embroidered cloths,
Enwrought with golden and silver light,
The blue and the dim and the dark cloths
Of night and light and the half-light,
I would spread the cloths under your feet:
But I, being poor, have only my dreams;
I have spread my dreams under your feet;
Tread softly because you tread on my dreams.
- William Butler Yeats
Posted by Ahipara Girl at 2:04 AM

Beautiful contemplative post. I've been googling John Pules work since you introduced him to me. Captivating stuff! The way you write about cloth and the stories stitched and layered makes me think you are about to create something amazing. The ideas are all bubbling and brewing. Can't wait to see what you do.
The Yates poem is one I had to learn at school. I always loved the last line....Tread softly because you tread on my dreams.
Tell me what you think of How to be an explorer.....I've been undecided about ordering it.

there's a reason we don't have curtains in our house...gets a bit cold in winter but we see the sunset and moonrise and the first light at dawn
and all the other bits in between...

have fun with those watercolours - i am!
xx

love the feedback girls. i hear that hum resonating back and forth between kindred spirits through the wires and cutting out the thousands of miles between us all.
the book is ok Robyn, random like I am prone to be sometimes. I think however I would've liked it to have more meaning. Maybe there is a market for meaningful jumping off creative pointing books. Some people can do it naturally. India does. So too does Nina. They've got their process and materials, and they've got something to say and are able to eloquently communicate it through their creations. India, Cleo and I figured that 'playing' or tinkering or mucking about with interesting stuff a good way forward for developing our own personal expressions, whatever they may be. I think it leaves room for surprises, space for mistakes (whatever they are!), and a reminder that what I am doing has to satisfy me some level. I want to enjoy my work, and the tedious bits are just the bits in the middle. I still have yet to create something that I feel is fully resolved, you know what I mean. Still, loving the journey but get a bit angsty about those dry bits in the middle. (And life won't sit still until I figure it out, meals to be cooked, kids tended, housework ... haha, ok, what housework!?) I've read your thoughts on this time and again. I think, once again, we're all speaking the same language. The book I'm hanging out for is one India and I think Nina as well recommended. It's called "Bird by Bird". I've heard such good things about it. It's a book about writing and life. But people on our journey are raving about it. So must be something in it. Get that one and we can talk about it together. I wouldn't mind a dialogue page between some of fave peeps. Got any ideas where we can form an intimate one? That's if anyone is interested ...