Koha is a New Zealand Māori custom which can be translated
as gift, present, offering, donation or contribution.

Koha literally means gift. Traditionally, in our culture, when people visited, they left a koha, a gift as a token of appreciation. My home has many taonga, treasures gifted to me over the years. Today my friend Wendy gave me a beautiful ring that she no longer wore. Its an old half crown coin fashioned into a ring on a silver base. 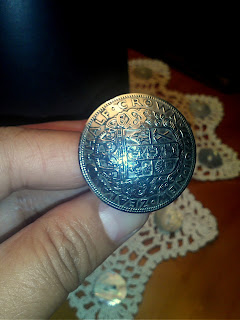 I love this ring. It has so many little motifs on it that are sure to find their way into my work. Little hei tiki, a crown, a coat of arms. I am quite taken by the Queen at the moment. I recently went to a local book fair and was compelled to buy every book I could find about her. I admire her capacity to remain calm and poised, gracious even under fire. I don't know how she does it with the family she has. I know I can learn a lot from her as a  significant woman leader.

Historically Maori have not had a great relationship with the Crown. When New Zealand became colonised, our people were subjucated to English laws, our language was lost, and we became second-class citizens in our own country. We have our own personal experiences in our family. My grandmother has deformed hands from being beat with a cane for speaking her native tongue. And an outsider did a con job that caused us to lose our tribal land thanks to a clause in the law. For many folk it is still a bitter point as the effects of colonisation are still felt across the nation into the third and fourth generations. Though some efforts have been made on both sides to address the imbalances of power, the tension between cultures is still there. We are fortunate that there is more tolerance in our part of the world still comparatively speaking. My husband and I are a marriage of mixed cultures, and it makes our family all the more colourful I think. 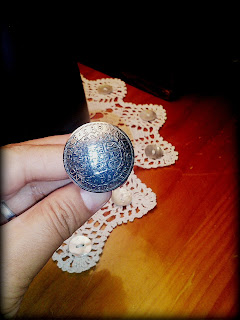 We have our language nests, kohanga reo where a minority send their children to learn Te Reo but New Zealanders in general still see Te Reo Maori as an option not a necessity. I always wonder what would happen if non-Chinese people went to China or non-French people went to France and refused to speak their languages. Awkward.

However, we must move forward. For my children's sake, I refuse to be hindered by backward thinking except my own for which I am responsible. My faith in God helps me to understand and forgive, and gives me a more honourable context to come from. One fuelled by love and forgiveness for others rather than keeping track of offenses, being mistrustful and fearful. I'm encouraged to be fuelled with solutions for the next generation. To give our children a future and a hope that is based on something higher.

I'm not immune to prejudice, lots of people annoy me and I'm certainly not perfect. But this ring on my finger helps me recall the best of our world, the best of people. And I admire the Queen, as an individual. I think she is beautiful. A stately strong woman who has held her own. (And I loved the movie The King's Speech about her dad.) 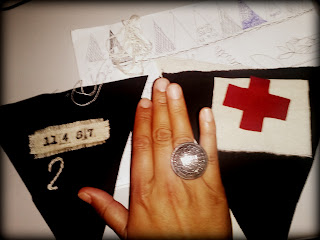 Koha, gift. Its important that we remember to be people who bring gifts to other people's lives. Whether it's grace when someone errs, a warm knitted hat, some thrifted goodies or a meal for a new mum. And not to be takers only. Like those that colonised our land. We need to be people who care for people. To leave behind taonga that will grow people, not tear them down.

Your tradition is the same as our Latvian tradition of bringing 'visiting loaf' in it's literal translation. I suppose it originated in the dawn of time when food was scarce and if you came to visit, it was a good idea to augment the victuals at hand. Now, of course, it is more in the shape of a gift suited to the person.
Yours definitely fills the bill.


The past is our history,
The future is a mystery,
Today is a gift,
That's why its the present.

You bring the gift of wisdom - time and time again!