I went to the Newtown Fair. Down a side alley, behind a big fancy stall sat a chick with a box and a few little sundries. On the box was a handwritten $2 sign. She was standing with some Indian women who were selling a few saris draped over a fence. Seriously, it was the most understated stall in one of our cities largest fairs. No big deal right? Wrong. I am never one to pass something that looks out of place. I mean seriously, there were fancy stalls, big tents, everyone had some kind of hooha to attract you. This girl (cause she's younger than my 38 years) sat on a plain stool with just a few bric-a-brac and that box.
Well let me tell you, I nearly fainted when I looked in the box. Inside were extraodinary handsewn embroidered cloths from Afghanistan. They were worn and old because (as she told me) they had BEEN BURIED during the war to stop people stealing them. So work it out. I have $50 and there are nearly 50 pieces in this box. I could've cried. I wanted to pick up the whole box and take them home. Or to a museum. I mean these are works that women have handstitched and trust me, it takes a lot of strength to pull a needle through up to eight layers of cloth. Times that by millions of stitches. hand beading (yes indeed!), handwoven fabric, shisha (the little mirrors seen on Indian clothing too) and we are talking serious treasure. I nearly peed my pants.
I think someone gave them to her. A dealer in town had gone through and picked out the newer nicer pieces so I got the OLD, DISTRESSED BURIED ONES which was fantastic because I love things that tell a story. Some of them still have the earth on them. I did check because it did cross my mind that they may have come from graves but she said to her knowledge, no. So I did a quick prayer and scooped up as many as I could.
I am in two minds about artifacts from poorer countries (due to exploitation by greedy ones) but also believe that when they fall into the right hands, have more chance of surviving and being valued. At $2 per piece nobody is going to make a profit I figure. It's sad that these came to be in that box but somehow I had a good feeling about it. One senses these things.
Last year I viewed clothing that a collector had gatherred off burial grounds. It including clothing and even a baby wrap (bless). The bodies had been exhumed by robbers and the jewellery taken. The rest was left to the elements. Being a serious collector of artifacts his reasoning was that this way these textiles would be preserved and saved rather than disappear completely. It challenged my thinking for sure. Who would ever believe perhaps our clothes will live on to tell our story across the other side of the world after we are long gone?
Likewise when the English came to New Zealand and took Maori artifacts back to England there was a huge uproar about the removal of tapu (sacred) objects including human remains and some of these have been returned to various tribes here in Aotearoa. Still in hindsight we can see that the greed and genuine intrigue of one race ensured the survival of important historical artifacts for another. Still I ain't gonna ever justify the desecration of such personal things nor the improper gain of goods. Can you tell the jury is still out on this one.
Now mind, I have a crook back (The last remnant of being preggers and delivering my wee babe knuckles) at the moment and had to take these photos while half-reclining on my bed. The light is shocking and the camera I have so old, that no decent shots of close-up shots of the handsewing on the back turned out well. Still I want to show you. If anyone can shed light on these pieces I would be interested to know. In the meantime I am feeling amazed at this serendipitous find. I love that. Serendipity. It is a wonderful thing.
The following site is one I looked up regarding textiles from this region.
http://anthromuseum.missouri.edu/minigalleries/afghantextiles/afghantextiles.shtml
I hope you enjoy seeing them. I loved Raiders of The Lost Ark when I was a kid. It was the ancient artifacts and treasure hunting that did it for me. This has that same sense about it. I feel so lucky to have these in my possession. It is a pleasure to view each piece, the handstitching, the layers of cloth, the detail, the skill, the mystery.
I will post more photos later.
My big pile of beautiful textiles 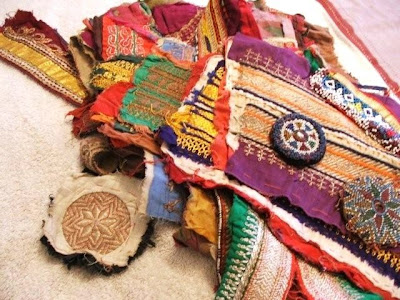 In a museum I would be shot for touching but I can touch, gaze and investigate to my hearts content. I have touched up my photos due to the poor light in my room but the colours are slightly more muted than they appear here.
Still that green is an emerald green so they aren't that far off to the real thing. 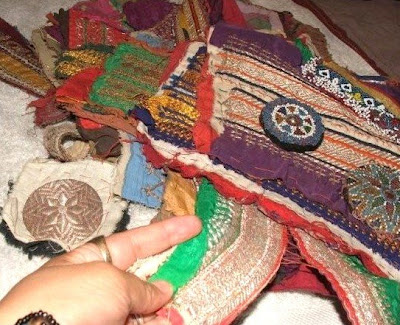 Here is just one bodice. I have about ten of these. Some with the dust and soil. Evidence that they were obviously once buried. 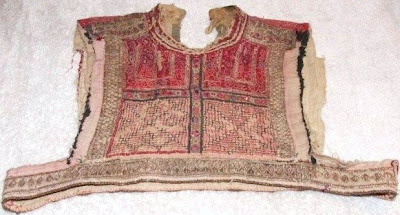 The back view. It is more pink than this. 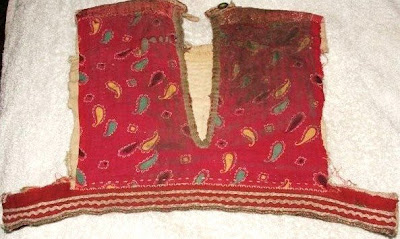 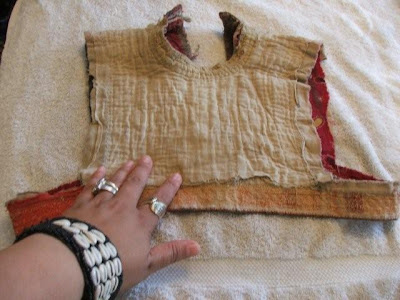 Layer upon layer of cloth is stitched together. 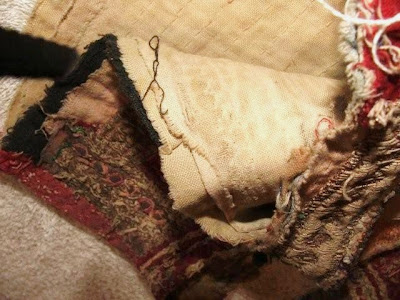 Thousands of tiny stitches through the many layers of cloth. 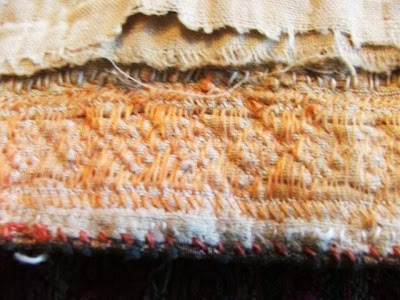 The button (and loop) closure at the back. Details of the colourful bodice that is handworked. 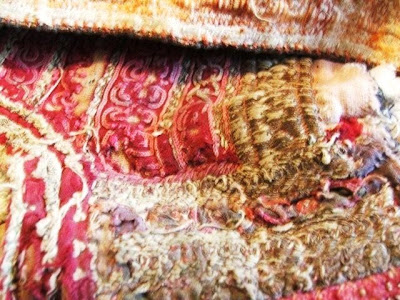 Shisha embroidery with those little mirrors (origin is India) 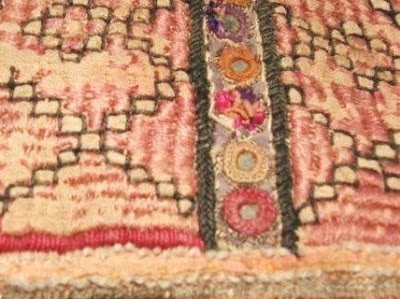 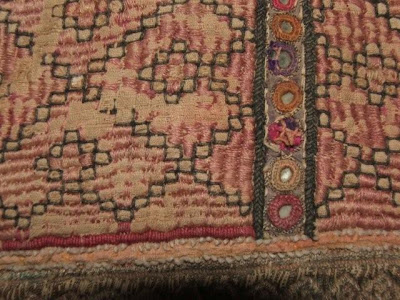 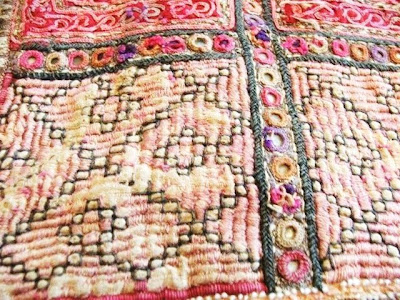 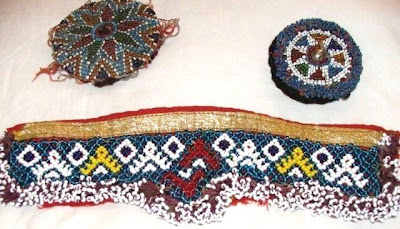 I want to do something with this but for now just goggle at it in awe. And wrap it around my wrist (but it's too long) so then around my upper arm (perfect). 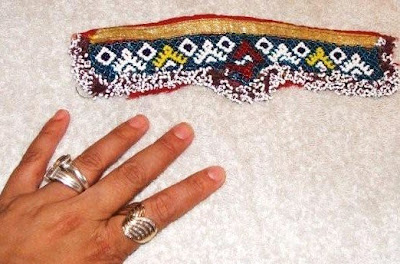 Those little white beads are all worked into the cloth threads indivually, woven not stitched I suspect. You can just glimpse that in the photo below. 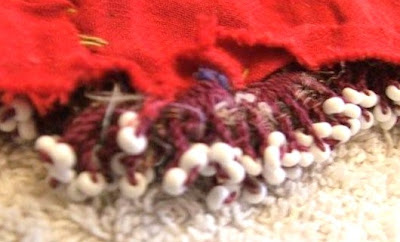 These beaded medallions are handstitched ... 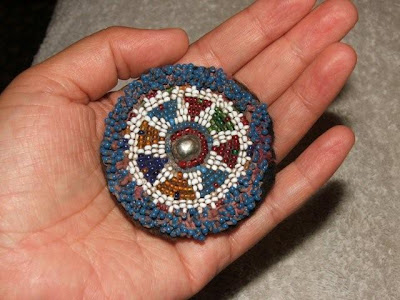 ...onto course, thick felt which I am guessing comes from yak hair or something because Afghanistan is also the home to those peeps that make yurts from felt. See! 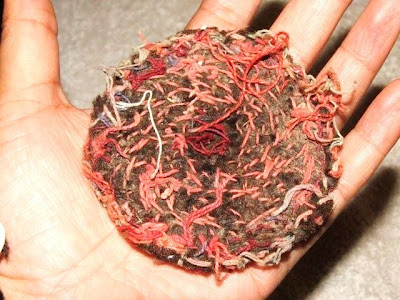 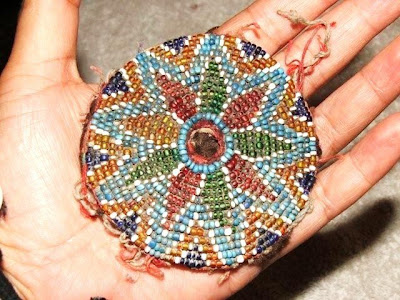 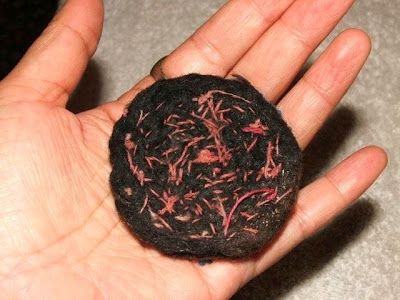 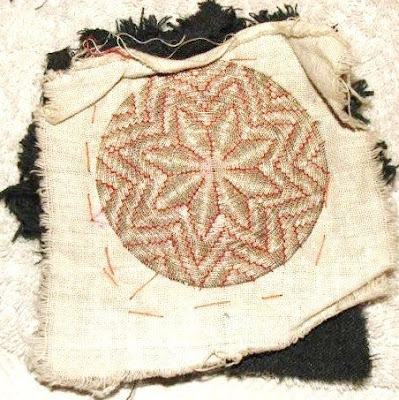 ...Until I turned it over and realised it had been handstitched. Holy moly, my head cannot even get aroung some of these pieces. 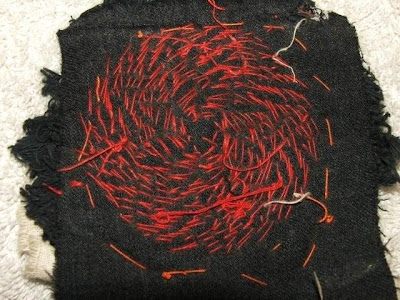 I will post more later.
Posted by Ahipara Girl at 12:06 AM

Wow! Wow! Wow! Rachelle, no wonder you are over the moon!These pieces are treasures indeed! I love the 3rd photo of the bodice in dusty pinks.

Are you kidding me?! This is the most amazing find ever!! Talk about being in the right place at the right time. Such amazing treasures. I am in love with your blog - I have been pouring over it for the last 2 hours and ignoring my kids :) You are just wonderful!