I found 150 buttons on the beach the other day. Yes, in the space of about an hour, in one small area. Does that officially make my beach a button beach. The day before I found nearly 40 and another friend 50. I have no photos cause I was too busy looking for treasure. They are mostly black and white and shades of grey. No coloured ones. And those clear ones. I found one with an anchor once. That was cool.
Three theories as to how buttons, used and new plus lots of disc-shaped plastic end up on my shores:
1) God throws me handfuls of buttons cause I'm a good girl and this is my reward;
2) The button fairy puts them there (Phoenix theory);
3) The button graveyard, where all good buttons come to die (Alena's theory).
Jury is out, but I like my theory best. Rich is worried buttons will deplete (perhaps thinking that then I will have to go and hang out at the mall and spend like those other normal women).
Not too worry. Three years and the buttons are still plentiful. I have a nice jar full to prove it and now to begin my crafty flag bunting, much like the Tibetan prayer flags. I've always admired those and wondered about making my own. I have some ancient chinese cotton from Asia and will stitch my buttons to this. It's a fun little project. My walls need more of my work on them.
The spiritual part - well that's easy. The beach is my favourite place to talk to God, it's where I feel closest to him. It's never been a building or an assembly of people. I really understand why Jesus would leave the crowds and escape into the hills to talk with his Dad. Away from the noise of life, the distractions, the self-importance. Just God and self. (And sometimes the odd kid to clamber over the rocks with).
Lots of crafting happening during winter solstice. A blanket-dress inspired by my tuakana India and assisted by my other sisters Cleo and Imbi, is currently a work in progress. Patches of silk, metres of random stitching and so forth. It's a very rewarding project after a couple of months of knitting. Finally finished neices hats so can send those.
Sometimes you meet people who resonate to the same rhythyms as you, who 'get' you and your passions. For me it's an intimate group of women, I call us the Gondwana sisters because we love the earth and all that she pours forth. Her clothing of nature, ocean, forest, foliage, sky. Our expressions, mark making. Our shared joy over stitch and cloth and painting and words and silence and food and gathering and sharing and generosity and gift-giving and treasure.
Around here lately there've been gatherings of women, lashings of creativity - the only joy winter brings is the lack of guilt of being indoors occupied with making stuff and the fun of wearing layers upon layers of lovely wool clothing. 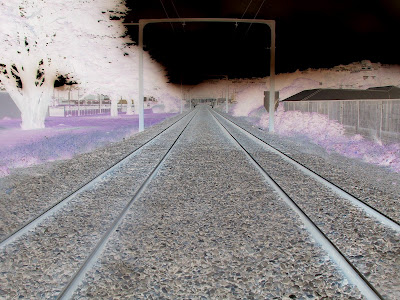 Another secret place to roam where rusty treasures are revealed
and musings of travelling spiral ever upward.
Still, if the clouds clear and the air is still, I shall be found dashing to my coastal haunt and squatting down amid drifts of sea leavings, scratching for those elusive round plastic discs. Sigh, the ones with three holes just boggle my brain. Ahoy!
Posted by Ahipara Girl at 7:51 AM

i think my theory is that God washes them ashore on your beach because he knows how much you love and enjoy them ;)

and i also think Phoenix is spot on, it's the Button Fairy taking personal responsibility for making sure you have fun at the beach

Maybe the trail of buttons leads to something bigger. I'm thinking of the amazing quilt you were making while waiting for little Knuckles.