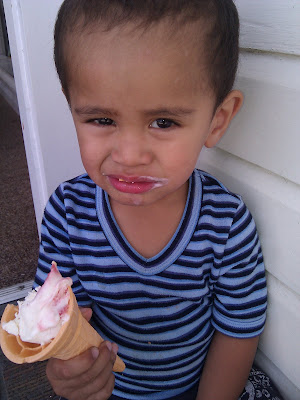 Children are very good at being themselves.
They have not yet succumbed to the artifice of being something they're not.
"This above all: to thine own self be true,
And it must follow as the night the day,
Thou canst not then be false to any man."
- Shakespeare, Hamlet.
"Be yourself". Two powerful little words I wish I'd heard more of when I was growing up.
Thinking back in my life to the people who stand out the most as having influence in my life, they are the people who spoke into me, who saw the good in me and believed in me, yes, even when the exterior was saying otherwise, they chose to believe for the good in me.
And the ones who did the most damage were the opposite. They criticised me and continuously pointed out what was wrong with me and what I needed to fix. Don't get me wrong, I needed direction and correction, but I also needed encouragement and praise for the bits I got right.
The CEO of Macintosh Computers and Pixar amongst other things gives a resounding speech of his own journey to himself and the importance of doing what we love. Go hear his entire speech over here. Its 15 minutes that won't be wasted. STEVE JOBS, Stanford Commencement Speech.
"Your time is limited so don't waste it living someone else's life. Don't be trapped by dogma, which is living with the results of others peoples thinking. Don't let the noise of others opinions drown out your own inner voice. And most important have the courage to follow your heart and intuition. They somehow already know what you truly want to become. Everything else is secondary."
- Steve Jobs, CEO Macintosh, Pixar.
Posted by Ahipara Girl at 8:46 PM

May you walk with beauty all around you. That is your path. You have an incredible eye for it and it's an inspiration to see you sharing the beauty in your life.

Take care. Good to see you posting to your blog again.

I enjoy reading about your life and the decisions you make about what you do. It seems incredible to make a connection with another woman half way around the whirld and a day ahead. I relate to your words. Your joys and frustrations. I appreciate your artwork and love your painted rocks. The fabric work you've done and the crocheted-covered rocks are heavenly. I send you my thoughts of encouragement and kindness to you. Thank you for making a connection with me by commenting about my work. I am blushing and honoredby your words and I'm pleased to meet you in this cyber-world. India has dropped golden nuggets for many of us to pick up and follow. Some of those nuggets lead us to make new connections with each other. I'm glad we met.